The Passion Façade of La Sagrada Família in Barcelona, Spain

Situated in Barcelona, and considered a UNESCO World Heritage Site, Sagrada Família (Holy Family) is one of the world’s most innovative places of worship. Construction began in 1882, though Catalan architect Antoni Gaudí revised the design a year later, infusing the Gothic basilica with art nouveau elements. Due to lack of funding and socio-political disruptions such as the Spanish Civil War, architects have worked intermittently on Sagrada Família for well over one hundred years.

One hundred years later . . . and they’re still working on it 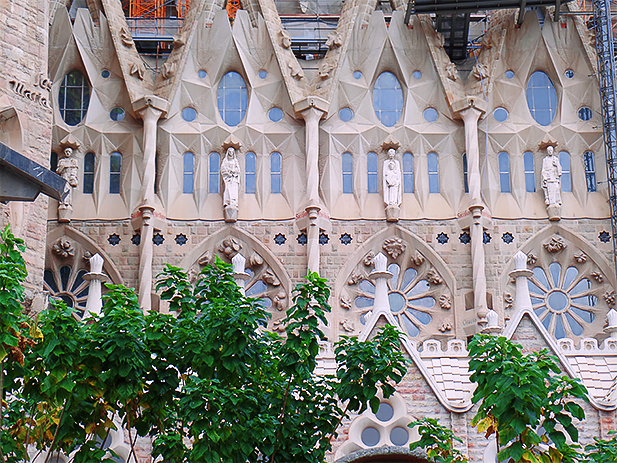 As they say, Rome was not built in a day. Envisioning the church as a tribute to the life of Jesus Christ, Gaudí understood that he would not live to see its completion. With three distinct façades representing the Nativity, the Passion, and the Glory, the basilica is brimming with religious symbolism. Gaudí’s design includes eighteen spires, which represent the Twelve Apostles, the four Evangelists, the Virgin Mary, and Jesus Christ. Architects project a 2026 completion date, symbolic itself as the centennial of Gaudí’s 1926 death. 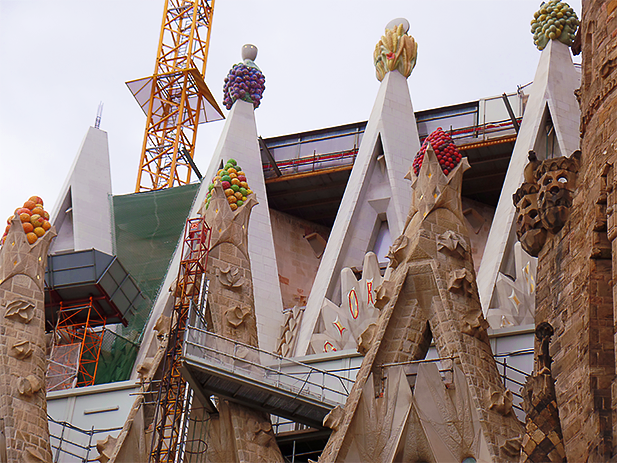 Detail of La Sagrada Família spires capped with wheat and grapes, representations of the Eucharist

Anything worth doing takes time and conviction. Many renowned artists spend their entire lives overlooked or ridiculed, never able to experience the recognition they achieve posthumously. Though often criticized as gaudy, Gaudí’s aesthetic transformed Barcelona. Sagrada Família, along with signature works like Park Güell, Casa Milà, and Casa Batlló have come to define the city. 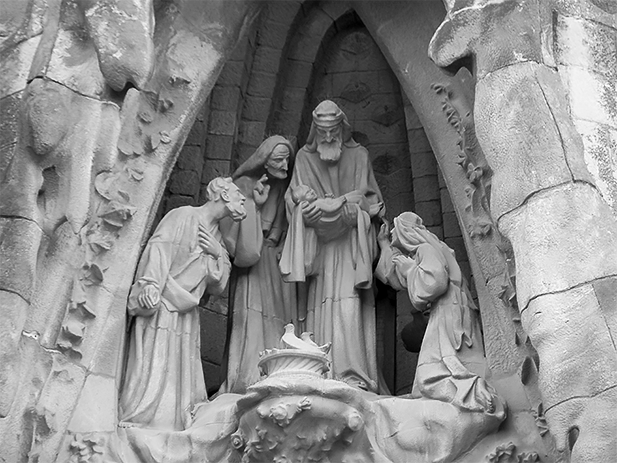 Detail from the Nativity Façade

To me, Sagrada Família encourages perseverance; something I’ve been lacking lately. After receiving a disappointing job rejection, I’ve found it difficult to motivate myself to write anything. I started this blog as a creative outlet, hoping to engage readers and inspire discourse. Through a tenuous connection, I was fortunate enough to meet with a TV executive a few months ago, on the day I posted my first Cultural Parallels article. He wished me luck but advised me that people are not concerned with culture. Based on my recent rejection and the absence of response to the Cultural Parallel entries, I started to believe him. I turned to some of my favorite miserable book passages, allowed myself to mope, and then moved on.

“He was letting go of things as he sat there so quietly: of some hopes, a few plans, pictures, intentions, and his whole being was undergoing the wrench of separation.” –Kate Chopin, A Mental Suggestion

“Whenever I find myself growing grim about the mouth; whenever it is a damp, drizzly November in my soul . . . and especially whenever my hypos get such an upper hand of me, that it requires a strong moral principle to prevent me from deliberately stepping into the street, and methodically knocking people’s hats off—then, I account it high time to get to sea as soon as I can.” –Herman Melville, Moby-Dick

Maybe people don’t care about my Cultural Parallels now—maybe they never will—but writing is both my Sagrada Família and my sea. Writing allows me to reinterpret the world while simultaneously asserting my place within it. It also keeps me from knocking people’s hats off. I can’t control society’s interests; all I can do is persevere.