The initial installment of my German “First 1000 Words” project. Art by me.

Polyglots are linguistic superheroes. Some kids want to be Superman when they grow up, but I was more interested in expanding my lexicon than battling Lex Luthor. Throughout the years, I’ve attempted to learn Spanish, French, German, Japanese, and Dutch. Most of these efforts have been ill-fated; I gave up on Japanese after memorizing ten Kanji characters in elementary school, and I gave up on Dutch when I realized I would never use it. Despite the six years I spent studying Spanish, I am not fluent in the language. I was able to ask for directions in Barcelona, and help hispanohablante customers at work, but I think too slowly in Spanish to feel confident in conversation. 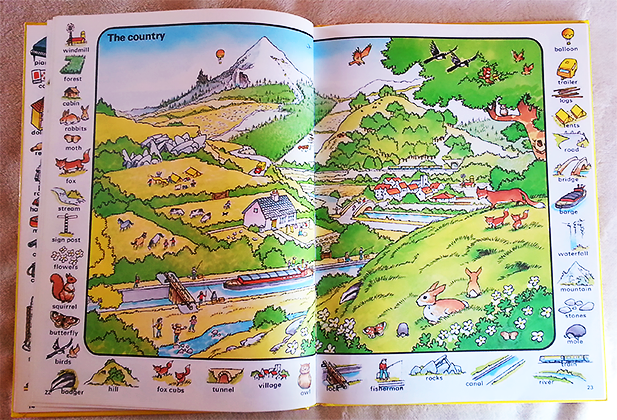 An excerpt from The First Thousand Words, detailing words from the country.

A few weeks ago, I found a box of old childhood books. One of my favorites was a Where’s Waldo–esque fully illustrated book called The First Thousand Words. It struck me then that I was going about learning languages the wrong way. As a child, I learned English by associating words with pictures. In school, we’re taught to translate foreign languages into our native tongue. The problem is that this creates too many degrees of separation from thought to speech. Before responding to someone, we translate their words into our own, think of an English response, and then speak a translation. It’s too much! My goal is to work on thinking in foreign languages, rather than simply attempting to speak them.

Inspired by The First Thousand Words, I’ve started learning German the way a German child would. I’m not yet concerned with conjugation charts; I’m focusing on listening to which words sound right. Ich habe einen Apfel. Sie isst ein Ei. (I have an apple. She eats an egg.) In honor of my childhood book, I drew representations of a few things one might find in die Küche (the kitchen). In case anyone else wants to use my drawing as a learning tool, I included translations. However, I recommend focusing on pairing the German words with the pictures rather than the English translations. It was a fun exercise, so I might sketch more household items soon.

My mom painted a detail of the First Thousand Words country scene on the front window of the playhouse my parents built me.